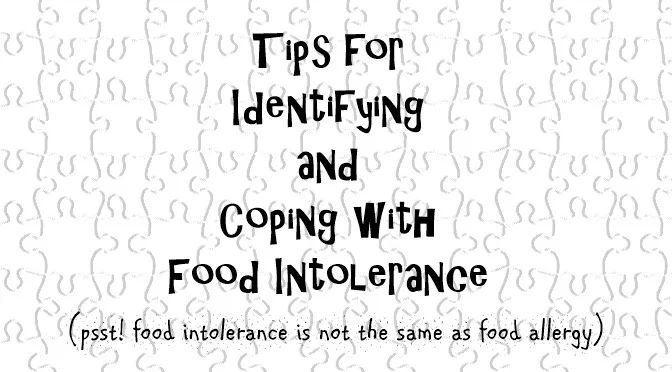 Identifying and Coping with Food Intolerance

My first inclination that something was awry were the stomach pains that plagued me after almost every meal. Within an hour of eating, I'd find myself in the bathroom, clutching my belly as what felt like the contents of a helium balloon worked their way through my system. After several months I finally scheduled an appointment with my doctor, who told me - after tons of tests - that I might have a food intolerance. Sure enough, cutting the offending substance (in my case dairy) helped immensely.

We're all pretty aware of food allergies now; I don't bring baked goods with peanuts into school for the kids and when hosting a dinner party make sure I offer a gluten free option for my celiac friends. An estimated one in four people has a true food allergy – an actual immune response to a certain food in which the body mistakes it as harmful substance and attacks. But what about a condition that isn't a true allergy? Experts believe that food intolerance, where the body doesn't properly digest or is irritated by these foods, is even more prevalent. The biggest difference between the two is in the body's reaction. The symptoms of a food allergy are almost immediate and can range from mild to severe, even becoming life threatening in some instances. Those of a food intolerance usually come on gradually and are more of a discomfort, including nausea, bloating and gas pain. Both come with a diet altering treatment plan in which the offending food, or foods, are removed.

As the American diet grows increasingly more processed and chemical and additive laden, the percentage of the population presenting with symptoms seems to be on an incline as well. The biggest issue in identifying the culprit of a food intolerance is the sheer number of ingredients we consume day to day, making weeding out the actual offender difficult. For instance, many processed foods contain fibers that are indigestible, leading to stomach pains that may be blamed on the wheat or soy also present in those same foods.

In my case, it took a bit of trial and error to ultimately figure out what exactly was leading to my post-dinner issues, and a little more after to tweak my eating habits. Besides the cutting of the obvious ingredients from my own cooking, there were the insidious dairy based additives hiding in the most unexpected places. I had to be suspicious of any food I hadn't made myself; it made eating away from home slightly difficult.

The good news? Intolerances, unlike allergies, can sometimes be outgrown. After a time, I realized I wasn't having the same adverse reactions when I'd accidentally get into something dairy related and began to include it into my diet little by little, and today I rarely have a reaction to the same ingredients that once wreaked havoc on my sensitive tummy.

So what should you do if you, like I once did, are finding yourself in the fetal position too often for your liking? Try keeping a food diary to see if you can find a pattern in your eating and symptom onset. You may also want to consult a physician, who can assist you in figuring out if you have an intolerance or an actual allergy with testing.

About the author…Tawny McVay is an ACSM Certified Personal Trainer and mother of two who owns The Asylum Gym and occasionally finds time to blog as The Asylum Girl. She's incredibly passionate about helping women lead their best lives and can be reached at 406.696.7925.